So far, in my quest to discover Carrie Edgington Eichhorn Friedell’s connection to Zion Lutheran Church in Chatt, I have learned a whole lot about her adult life. I learned about her two husbands, Edwin H. Eichhorn and Max W. Friddle/Friedell; her two children, Glen and Lillian Marie Eichhorn Whitney; and her grandchildren.

I made the necessary connections in her family tree and put families together with my on-line research but I still had not learned what I had set out to learn–her connection to Zion Chatt and how she came to be laid to rest in Zion’s cemetery. [1] 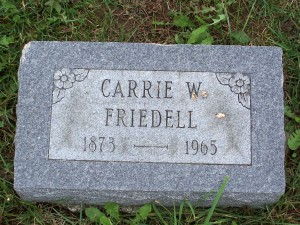 The research indicates she lived most, if not all, of her life in the area around Niles, Huntington, Muncie, Marion, and Salamonie, Indiana. I don’t know that she was ever even in Ohio except to cross our state on her way to Pennsylvania in 1919 when she married Max Friedell. There seems to be no “recent” information about Carrie on the Internet; very little after the 1940 census. Carrie’s daughter moved to Canada and Carrie’s second husband Max Friddle/Friedell seemed to vanish. I know only that Carrie was living in Albany, Indiana, in 1957. [2]

There were still a lot of unanswered questions: What did Carrie do and where did she live between 1940 and 1965, the year she died. Did she meet someone from the Chatt area during those years? When exactly did she die? Where did she die? I think she died in Indiana.

My strategy has been to look at Carrie’s “FAN Club”–her family, associates, and neighbors. So far I had found no connection to Zion Chatt among Carrie’s FAN Club during her adult life.

Did I miss something or should I try another strategy?

I decided to go in another direction. The only other direction to go was backward and to look at Carrie’s early life. Carrie’s life before she married Edwin Eichhorn. I would look at her parents, her grandparents, and her siblings, to see if her connection to Zion Chatt was somewhere among those people, somewhere among that “FAN Club.” See if any names sounded familiar and maybe connect with one of Zion’s past members. Anything.

As far as information about Carrie’s youth, there isn’t a whole lot to look at between her birth and her first marriage in 1893. Born in 1873, she would have been enumerated as a 7-year-old child in the 1880 census. The 1880 census is the only census to look at because the 1890 census was destroyed by a fire and she was already married to Edwin Eichhorn in the 1900 census.

In 1880 Carrie, 7, was living in Niles, Delaware County, Indiana. She was living with her father Franklin, 31, and her sister Nettie D, 9, in the household of her paternal grandparents, Willie, 72, and Hannah Edgington, 70. Carrie, her father, and her sister were living with Franklin’s parents. Also in the household were two of Willie’s other granddaughters, Julia, 17, and Cora E, 15, as well as Malinda J Edgington, 22, daughter-in-law. Daughter-in-law? Wife of Franklin? [5]

Where was Carrie’s mother Eliza? Did she die sometime between 1873 and 1880? If so, why wouldn’t Franklin be shown as a widower? Instead he is shown as single and married. Both boxes are checked. Was Malinda J really Franklin’s wife?

Willie Edgington was a farmer and Franklin’s occupation was “at home.” Willie, Hannah, and Franklin were all born in Ohio while everyone else was born in Indiana. [5]

I looked at the Edgingtons. The Wilson Edgington family moved from Adams County, Ohio, to Indiana about 1853. They likely settled in Delaware County, where they remained for decades. [6] [7] [8]

Still, no names from Carrie’s Edgington “Fan Club” seemed to connect her to Zion Chatt .

I looked at the Bobos. Carrie’s mother, Eliza Bobo was the daughter of Ezekiel Bobo and Sarah (Wren) Bobo. Ezekiel and Sarah were married 8 April 1825 in Athens County, Ohio. [9] So that is where Carrie’s middle name Wren comes from.

Ezekiel and Sarah had a large family and some of their children moved to west central Ohio and east central Indiana. Eliza’s brother Thomas Wren Bobo married Mary E. Jacobs in Allen County, Ohio, in 1864. [12]

Her brother Elihu married Dora Lillibridge in Blackford County in 1874. [13] Perhaps Eliza came west to Indiana with one of her siblings, where she met and married Franklin Edgington.

I looked at Bobo marriages and Carrie’s sister Nettie D’s marriages, but none of those names are common or familiar to the Chatt area.

Then I found a clue! Information on Find A Grave.com indicates that Ezekiel Bobo’s daughter Harriet “Eliza” Bobo died in 1875. It also indicates she was born in 1849, but there is no link to her tombstone on the website. [11] What happened to Eliza?

Again I thought of the 1880 census, where I wondered where Carrie’s mother Eliza was and if she died before 1880. Did Eliza really die in 1875?

Where had I heard those names before?

No! Could it be? I could not believe what I was thinking.

One of the basic things to look at when doing cemetery research, something I have mentioned over and over in my cemetery talk, is to take note of who is buried near the deceased. Who are the deceased’s neighbors in the cemetery?

Who is buried in the plot next to Carrie?

I raced to get Zion’s cemetery plat map. There it was.

Then I had my Ah-ha moment. I should have thought of this before!

Carrie W. Friedell is buried next to Eliza, wife of Franklin Edo…

That is what is inscribed on the tombstone. Eliza’s stone is an old broken tombstone that is barely legible. It is broken right in the middle of the surname. EDO—broken stone.

But I suddenly realized that the three legible letters of the surname aren’t EDO after all. The letters are EDG. The surname has got to be EDGINGTON. What looks like an O is actually a G.

Carrie is buried next to her mother, Harriet “Eliza” (Bobo) Edgington.

Eliza, Wife of Franklin EDG [ington]. That is how the broken tombstone should read.

A few weeks ago, in the middle of August, I wrote a Tombstone Tuesday post about a broken marker in Zion’s cemetery, the broken tombstone of Eliza, wife of Franklin “Edo…” Eliza was the name carved on an old broken stone in row 1. All that is legible is Eliza, wife of Franklin, and what looks like a surname beginning with the letters EDO. Her death date is broken off but her age remains: 30 years, 4 months, and 18 days. [15] Joe and I studied that tombstone this past summer, trying to make out any additional letters and trying to figure out a surname that would begin with the letters EDO.

I had just solved two mysteries while at the same time creating even more questions. 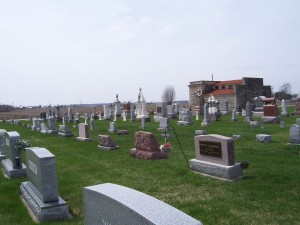 But now I have to wonder, how did Eliza (Bobo) Edgington come to be buried in our cemetery? Eliza and Franklin were married in Indiana and they lived in Indiana. Delaware County, Indiana.

There is no record of Eliza’s death or burial in Zion’s records. The same for Carrie. Nothing recorded in the church records. Like mother like daughter… Eliza’s death is not recorded in Mercer County’s probate death records either.

I can come up with one possible scenario: Perhaps Dr. Franklin Edgington lived and/or practiced in the Chatt area in the mid to late 1870s and his wife Eliza died here and was buried in Zion’s cemetery. Carrie would have been a young girl, about 4 or 5 years old when her mother died.

And, I have other questions as well:

Who knew, after all those years, to bury Carrie by her mother?

Who kept that plot reserved for Carrie for nearly 90 years?

Were burial instructions in Carrie’s will?

And the search will continue, just not as fervently. I will continue to wonder why and search for an answer to learn how Eliza (Bobo) Edgington came to be buried in our cemetery. I would love to hear from any Bobo or Edgington researchers and learn more about Dr. Franklin and Eliza during their short married life. And to close the final chapter on this mystery. 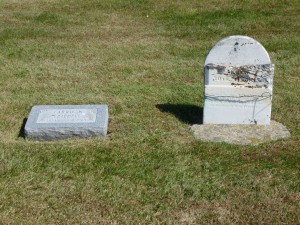 I mentioned several times that Carrie is buried in row 1 of Zion’s cemetery. What I call row 1 is an arbitrary row number, assigned when the cemetery was read in 1990 by the Mercer County Chapter OGS. They assigned row numbers so people could locate a tombstone easily. Row numbers were not assigned by our church. The oldest surviving tombstone in our cemetery dates back to 1868 and it is located in the center of the cemetery. Back then I doubt there was a driveway around the cemetery. People probably just walked in from the road. Thinking of how the cemetery looked back then, Eliza’s tombstone would have been at the very back of the cemetery, on the far west side.