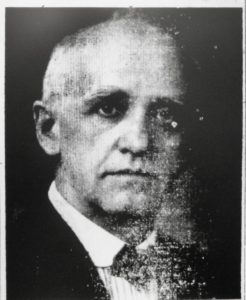 Rites Are Held Wednesday For Widely-Known Resident
Final tribute and funeral services for William G. Hoffer, civic leader and journalist of Willshire, were held Wednesday afternoon, January 19, 1949, at 2 p.m. at his late residence in this town. Rev. E.O. Bissell, pastor of the Willshire Methodist church, assisted by Rev. R.C. Tucker of Van Wert, conducted the last sad rites, and special music at the piano was played by Mrs. Carrol Geisler. Burial was made in the local cemetery under the direction of the Cowan and Son funeral home of Van Wert.

Death resulted from complications following major surgery at the Decatur, Ind., hospital on December 21, 1948. Although afflicted for a number of years with the ailment which made the operation necessary, his condition did not become acute until several months ago.

Realizing that he could not long endure the severe pain that overtook him prior to going to the hospital, Mr. Hoffer finally consented to undergo the surgeon’s instruments, but reluctantly, on account of his advanced age, prospects for his recovery were bright at first, then the tide turned and the Grim Reaper removed him from this mundane sphere.

A son of the late John and Susan Durst-Hoffer, he was born October 26, 1865, in Centre County, Pa., being the last of a family of 13 children to answer the final summons. He had attained the age of 83 years, two months, and 19 days.

His marriage to Ora M. Morehead was an event of December 19, 1893, and the celebration of their golden wedding anniversary was a source of much pleasure to them and the people of this town and community.

Mr. and Mrs. Hoffer became the parents of two children, George Edward, who died in infancy, and Gretchen of Worthington.

When a young man, Mr. Hoffer took to newspaper work and followed that vocation the greater part of his life. His career covered all phases of the fraternity, from printer to editor, and his fame as an editorial writer was known far and wide.

In his younger days the ”colonel” amazed colleagues with his ability to cover the story and write three columns of news without having taken a note.

In addition to being a former editor and publisher of the Willshire Herald, he assisted in founding the Van Wert Times and Wapakoneta Daily News and was associated with other newspapers in Ohio, Indiana, Kansas, and many other states. He was included in the list of reporters who followed Coxey’s Army on its historic march to Washington D.C., reporting the facts as a representative of the larger city dailies.

The Hoffers first came to Willshire in 1900 and after a brief absence returned here in 1918 to make this place their permanent home.

Politically, Mr. Hoffer was a staunch Democrat and labored diligently in the party’s cause, one reward being his appointment as a postmaster here, his tenure of office extending over a period of 22 years, the retirement law stopping further service in this line of work.

Mr. Hoffer’s interest in the welfare of the town and its citizens is best attested by the recognition given him through his election as mayor, member of council, member of the board of education, and finally as justice of the peace of Willshire township, a position he held for the past eight years.

For a short period he served as the town’s marshal and had many connections with the County Democratic Central Committee.

Fraternally, the deceased had affiliations with the Masonic and Elk lodges of Wapakoneta, and Chas. A. Knott Lodge, Knights of Pythias, of Willshire, an order with which he was identified for nearly 60 years, many years of which he was master of finance of the local lodge. The Elks and Knights of Pythias lodges held services for their departed brother at the home Tuesday night.

Besides these, he had many other identifications, some being that of a school teacher, farmer, stockholder in the old Farmers and Merchants State Bank and Willshire Equity Union Exchange Co., treasurer of the former Willshire Cigar Co., secretary and manager of the one-time Willshire Canning Co. and Willshire Telephone Co., and various connections with the town’s business men’s and community clubs.

Religiously, he was born and reared in the faith of the Reformed church, and at one time in early manhood was a student in Heidleberg College at Atchison, Kansas, with the intention of preparing for the ministry. In 1880 he served as a delegate to the YMCA national convention in St. Louis.

As a citizen, husband, father, and friend he had few equals, and as a follower of baseball and kindred sport, his enthusiasm was considerably restrained.

All in all, it can be truly said that Mr. Hoffer’s passing will be keenly felt in these environs for many years to come, and in bringing to a close this last testimonial to one who selected the newspaper field as his vocation, no more fitting words could be used than to say it with Mr. Hoffer’s own words, “Goodnight and 30.” 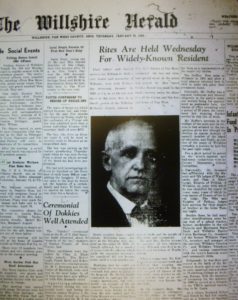 A few of my observations about the information in Hoffer’s obituary.

About the “30” mentioned at the end of his obituary, journalists put the number thirty (-30-), three pound signs (###), or the word “END” at the bottom of a press release copy, indicating the end of the article. [Our son Jeff, who has a Bachelor degree in Journalism, explained this to me when I started blogging. Myself, I use ###.]

There is some conflicting information as to the name of William G. Hoffer’s father. This obituary names him John. He was Joseph in the 1870 census, George in the 1880 census, and George in his newspaper death notice.

The Hoffer’s marriage announcement in a Kansas newspaper [married last Thursday night at the home of the bride] indicates they married in 1894, not 1893. [The Tiller and Toiler, Larned, Kansas, 28 Dec 1894, p.4, Personal Matters; digital image by subscription, Newspapers.com, viewed 2 May 2019.]

Coxey’s Army [mentioned in his obituary] was a protest march by unemployed workers from the United States, led by Ohio businessman Jacob Coxey. They marched on Washington, D.C. in 1894, the second year of a four-year economic depression that was the worst in United States history to that time. [Wikipedia] Hoffer did seem to be very interested in politics.

It is interesting to read about the Willshire Cigar Company and to see Willshire’s canning factory also mentioned.

Hoffer’s obituary, from the Willshire Herald, is on microfilm at the Brumback Library in Van Wert. Since my last visit there they have acquired a new digital microfilm reader. It is quite nice and is user friendly, after the helpful staff at the library showed me how to use it. I particularly like the automatic focus and the sharp image it produces. Also nice is the tall monitor, which is perfect for reading newspaper images. It has several zoom features and many other features that I have not used yet, but I will be using it more in the future. I took digital photos of the images with my pocket camera, but you can also print a copy of the image on paper. I prefer to use my camera, one reason is that I simply do not need any more papers around here. Digital is also easier to store and magnify on my laptop. 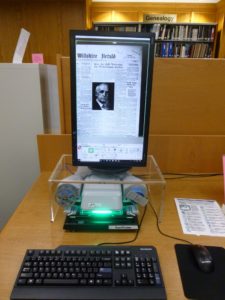 Wouldn’t Mr. Hoffer be amazed with today’s technology and means to share the news. I am sure he would be delighted to see that so many people enjoy reading and searching through old newspapers today.

Wouldn’t he be proud to know that the newspaper he once published and labored over and loved is still read and shared today, just in a very different format.