Below are some more letters that my dad, Herbert Miller, wrote home during his basic training at Fort McClellan, Alabama. It was the summer of 1944 and he was in Company A, 12th Battalion, 8th Regiment there. His sister Helen was dating Paul “Red” Linn at the time and Red ended up serving in the Pacific. Helen and Red eventually married. 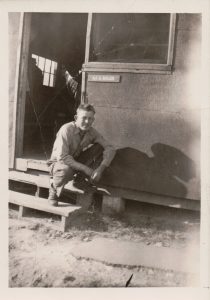 It’s Saturday night and not much doing here. I’ve been writing letters all evening. Wrote 11 so far besides a few odds and ends. So, I’m glad I learned how to sew buttons and to patch. I had to do both this evening and still have a little mending to do. I washed out my fatigues tonight. Now that makes me sound like a woman so I’m going to stop.

No, I didn’t get the grapes Ruth sent. We have been eating out in the field about every day this week.

Sure wish I had a camera down here. There are a lot of pictures I would like to take to show youins what the camp looks like.

Is Helen still hearing from Red? He ought to be getting a furlough pretty soon.

It looks like the war with Germany will end soon. But Japan will take awhile. I thought they would be starting on the Philippines pretty soon.

There is an Irishman here who has been in the U.S. only about 9 months. He really is a lot of fun. Last night he was giving the Prime Minister Chamberlain’s speech and it was really good. 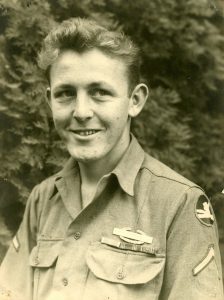 It is Thursday morning and am waiting for the whistle to fall out. It was 2 o’clock before I got to bed last night. We had a night problem in the hills. I have put in about 40 hours already this week and here it is only Thursday morning. Most of the guys from other companies say this is our hardest week.

They have a new giz [?] system now, have so many points for certain things that are undone or done wrong. Such as dirty floor = 1 pt. etc. After a person has 6 pts. in one week he is restricted to the co. area or put on detail for three nights in a row. So far I have one point this week.

Will probably get K.P. tomorrow or Saturday. They are up to the Ms already.

Yesterday morning they picked out 30 men to demonstrate scouting and patrolling to the rest of the Co. and to the majors, colonels, and general. I was in it. Had to run the problem three times.

It sounded like the whistle, so I guess I’d better close for now.

P.S. Tell the kids to study good in school.

[Note by Karen:That is the second mention of grapes being sent to him. Sending grapes through the mail to Alabama in early fall? There must be a story behind that!]

It’s Saturday night and it is getting sort of late. Tomorrow we set up our stands. We have a box about four ft. square and 4 in. high to fill up with sand and put the stove in it.

Yes, I got your stationery. In fact I go two packages of it. I’m putting yours to a lot of bother [?], the candy, camera, and film. Tell Helen I will pay her for the film when I come home.

Monday and Tuesday I didn’t get any letters but Wednesday I got about 10-12.

K.P. and table waiting was really tough this last time. Sure glad it is over. Monday we fire the mortars and in two weeks we go out on maneuvers for a week and then next three days are back here. Then we take off again for another place for two weeks.

We were supposed to crawl under machine gun fire this week but we didn’t. This morning we had a two hr. show on “the Battle of Russia.” Last week we saw the show on “The Battle for Britain.”

Today we went through the obstacle course with light packs or combat packs and rifles. It is easy to go through.

I can’t think of much to write and am getting pretty sleepy.

Did Bud Oakley pass for the Army? I imagine Dale will be gone by the time you get this. It will really be hard on him with the ideas he has.

Guess I [will] close for now and write more tomorrow. 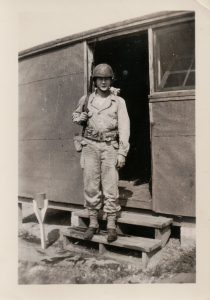 One of my dad’s basic training buddies, Pvt. Robert McDonald, from Gettysburg, PA.

It’s Sunday evening and it is getting sort of late. I thought I would drop you a few lines and send you my picture. This letter will be short.

We put up the stoves today. Had to fill a box full of sand and clay to set the stove in for protection of fire.

We had two good meals today. This evening I mopped the hut, cleaned the rifles, washed my fatigues, and decided to write a few letters. Time sure is going fast. Only 7 more weeks to go.

How are the crops coming along? How did the beans come out or aren’t they combined yet? Johnnies said a lot of the beans are ripe now.

Tell Helen not to worry about Red. I imagine he is planning to surprise her and his folks by coming home pretty soon.

P.S. I just had to tear the letter open. I forgot to enclose the picture. Ha!

Below is a photo of Paul “Red” Linn, who was dating my dad’s sister Helen during the war. Red is mentioned in quite a few of my dad’s letters. Helen and Red married after the war. 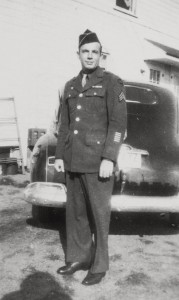 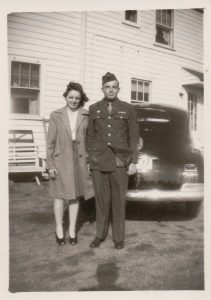 Here it is Wednesday evening again. Time surely is going fast. Those night problems we have make it go faster too. We had a 4 hr. one Monday night and got in at 12:30. Last night we had an 8 hr. one and got in at 5:20 this morning.

We had yesterday morning and this morning off so I’m getting plenty of rest. As for the eats, they are excellent.

I received the camera and box. Thanks a lot. I know I’m putting youins to a lot of bother. The reason I wanted the hard candy, I take about 6 or 7 pieces along and leave them melt in my mouth while we are marching to keep from getting thirsty. I took 4 pictures already. Some of my buddies, the other 4 will take with our O.D.s on. Did you receive that picture yet? It’s not very plain. My buddy took it.

Tell Helen this camera will be OK. I won’t have so awful much time to take pictures. We only have one more Sunday off before I come home. The rest of the time will be in Libman [?].

I remember that my dad always liked hard candy. He may have acquired a taste for it during his basic training. He also liked to take photos and he developed the pictures himself. Quite a few of his photos survived and I am thankful to have them.

My dad did not mention anything about the new hen house on the Miller farm back in Mercer County, Ohio, in any of these letters. Perhaps it was completed by this time. Below is the only photo I could find of what I believe was hen house that was built during the summer of 1944. I believe it was the long white building on the left side of the photo below. I am sure some of my relatives remember for sure. This photo would have been taken years later and it looks like my dad’s youngest sister Anna Lou, who looks like she is resting after a whole lot of snow shoveling. 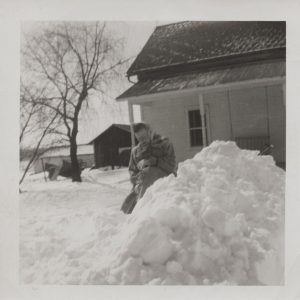 This past Wednesday, 29 November, was my dad’s birthday. He would have been 92 years old. He has been gone for 5½ years now and we miss him a lot.